Many people explain weight loss with a simple “calories in, calories out” equation: if you eat less than you burn the pounds will come off. In reality, losing weight is a much more complicated process. While energy balance undoubtedly plays a major role in determining whether pounds come or go, there are also many other factors in weight loss. You’ve probably already noticed that younger people and men lose weight faster than older people or women. So, here we’ll delve into some of the more surprising factors in weight loss including: living environment, relationships, work schedule and genetics! 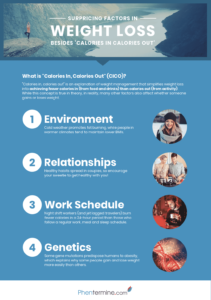 The Theory of Calories In, Calories Out

Over the years, many people have made weight loss sound easy by reducing it into a simple formula of calories in-calories out. More specifically, experts explained that if you burn more calories than you consume, you’d lose weight. While this theory proves true in a perfect world, in reality there are many other factors in weight loss.

The science behind ‘calories in, calories out’ is undeniable. A calorie is a measure of energy and our bodies need energy to function. We burn energy (calories) every minute of every day, so we need a source of fuel to provide us this energy. This fuel can either come from outside or inside the body.

Exterior energy comes from food and beverages, or anything else we consume that contains calories. Different foods contain different amounts of energy, which is why their nutrition labels display different caloric contents.

We also store energy that we can draw on in case there is a lack of exterior fuel. Inside the body, energy is primarily stored as fat. When there is a shortage of external fuel, our bodies burn fat for fuel. Therefore, the theory behind ‘calories in, calories out’ is that in order to lose weight, you need either restrict intake or increase activity so that your body burns more fat. Over time, burning fat leads to weight loss.

Calories In, Calories Out for Weight Loss

There are 3500 calories in one pound of fat. That means that in order to lose one pound of fat, you need to force your body to burn-off 3500 extra, stored calories. You can create the desirable imbalance by eating less, moving more, or best yet, a combination of the two.

The math of fat burning serves as the justification behind calories in, calories out (or “CICO”). Proponents of this theory believe that a calorie from fat is the same as a calorie from carbs as a calorie from protein. However, biology dictates that we process each of these components distinctly and research shows that each type of calorie affects weight loss differently.

In reality, then, there exist many other factors in weight loss besides calories in & calories out. We would be remiss to talk about weight loss without considering the many elements that affect eating and activity patterns on a day-to-day basis.

Other Factors in Weight Loss

So what some of the other factors in weight loss? Apart from ‘calories in, calories out’, you may already know that age, gender and lifestyle also affect weight loss prospects. However, did you know that environment, relationships, work schedule and genetics all affect your efforts to slim down as well? Here we’ll talk a little more about each of these more surprising factors in weight loss!

You may not think of your neighborhood as a major factor in weight management, but research shows it makes a big difference. From climate to population density, science shows that where you live affects how much you weigh.

Climate as a Factor in Weight Loss

For those of you that live up north, there’s an upside to those frigid winter temperatures! A 2010 study suggested that we burn significantly more calories when exposed to cold temperatures. This is partially because the body spends a lot of energy trying to keep itself warm (through shivering, etc.). However, it’s also due to an increased production of brown fat – the good type of fat. Unlike white fat that stores extra energy, brown fat burns calories to produce heat. The study showed that exposure to cold temperatures generates more of this productive brown fat. So, next time the temperature drops, try to remember this slimming silver lining as you reach for your jacket!

Interestingly, the body also uses a lot of extra calories when it’s trying to stay cool in very hot temperatures. In warmer climates, women may also focus more on body weight and shape. A 2002 study found that women in the Southeast US (an area with a warm climate year-round), on average, maintained lower BMIs and worried more about body shape than their Northeastern counterparts. So, while cold weather increases calorie burn, warmer climates may foster more of a focus on staying slim.

Neighborhood as a Factor in Weight Loss

Perhaps because of the proximity of buildings in the city, or due to a wider variety of healthy foods, city dwellers tend to weigh less than rural Americans. According to recent NHANES data, just over 33% of urban adults are classified as obese, but this percentage jumps to almost 40% in rural areas! This data was self-reported, so experts estimate the real percentages could well be even higher.

It probably won’t shock you to hear that your relationship affects your weight. Most of us emotionally eat, and whether it’s positive or negative feelings, you’ve probably watched your weight fluctuate during the ups and downs of relationships. You may have also noticed that your partner’s attitudes towards food and health affect yours.

The stereotype is that stable relationships lead to weight gain. This proves true in rural areas of the US, where being married is associated with higher rates of obesity. Thankfully, new research shows that when one partner commits to weight loss the good habits tend to carry over!

Have you ever noticed that your partner’s attitudes towards food also affect your eating habits? In a recent study, 130 people committed to either a formal online weight loss program or self-guided weight loss program for six months. Regardless of treatment condition, both the participants and their partners showed significant weight loss at the three and six month mark. These results indicate that when one partner commits to weight loss those healthy habits wear off onto the other partner as well.

Many articles also tout the benefits of breaking a sweat with your sweetie. In addition to fitting in some quality time together and fostering a little friendly competition, couples who exercise together are more likely to stick with their workout plans. So, plan a quick hike, bike ride or walk around the neighborhood next time you’re in the mood for a healthy date night!

Even though it may not be the first factor to pop into your mind, work schedule also affects weight status. Shift workers, especially people who frequently work the night shift or work rotating shifts, may be more likely to gain weight.

A 2014 study from the University of Colorado showed that people who work and eat at night burn less calories in a 24-hour period. Even when participants had a similar eight hours of sleep, and consumed the same number of calories, researchers found that the shift workers’ metabolism slowed when they were working and eating at night. This change may be related to a mismatch between the participants’ circadian clocks and activities. So, even if you eat the same number of calories and maintain a consistent level of activity, working the night shift or frequent travel across time zones (resulting in jet lag) may predispose you to weight gain.

A more recent study out of the UK indicates that frequent night shift work also increases the risk of developing type 2 diabetes. While all night shift workers experienced a higher incidence of the disease, people who work rotating shifts had the most increased risk.

Work schedule, then, is one of the most overlooked factors in weight loss.

Have you ever noticed that some families seem to pass down genes for skinniness, while others mother-daughter pairs are always dieting together and still struggle with their weight? Genetics are another one of the big factors in weight loss.

A 2007 review showed that certain gene mutations predispose people to obesity. In fact, experts estimate that genetics are responsible for anywhere from 30-50% of variations in weight status. Our DNA affects predisposition to accumulation of fat mass, leptin levels and BMI.

Even though scientists have not yet identified which gene is specifically responsibility for obesity (or its causes), both research indicates that genes play a major role in weight loss – regardless of environment. When looking at adoptive families, for example, adopted children tend to have body weights more similar to their biological parents than their adoptive parents. Twins, even when raised separated, also maintain similar body weights. So, while environment and lifestyle decisions are undeniably important factors in weight loss, genetics also play a significant role.

What do you think? Is weight loss as simple as “calories in, calories out” or are there other factors in weight loss as well? Share your thoughts with us in the comments section below!

Subscribe to our weekly newsletter and get our best weight loss tips straight to your inbox!

Hundreds of people, web pages, forums, and groups provide thousands of different viewpoints on phentermine. So, how do you know what’s true and what’s not? Here we’ve debunked a few of the most common phentermine myths and misunderstandings! 1. You…

Water weight is something every woman (and many men) fear when they are on their journey of losing weight. It can feel like it ruins your progress, discouraging you from working through it and possibly even giving up. If you…

Counting calories is a good way to limit your food intake while you’re trying to lose weight with phentermine. However, there is a lot of debate about how many calories you should be eating to achieve weight loss with phentermine,…

We’ve made it through another year – this year is soon to come to an end! Whether this last year was successful with weight loss or not, it’s now in the past and we have next year to look forward to and…

As you progress along through your fat loss diet, one thing that you definitely want to be focusing on is making sure that you balance your nutrition.  One big mistake that some people make is neglecting whole entire groups of foods,…

As well as setting the goals you want to achieve and planning out how you will approach each of the weight loss stages with phentermine, it’s a great idea to devise a daily weight loss schedule to make sure that… 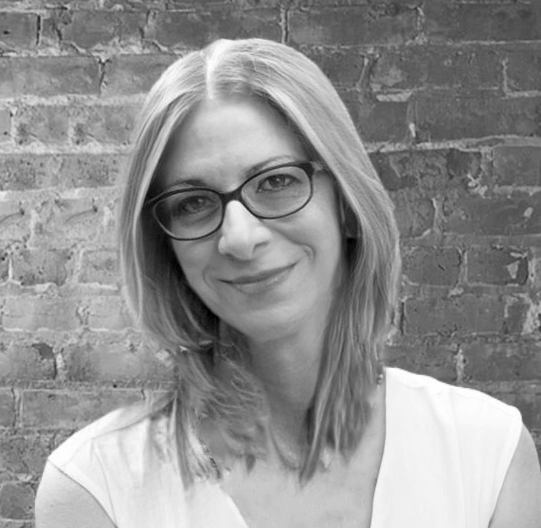 Sally Cohen holds a degree in nutrition sciences from Alcorn State University. She is passionate about promoting health at any size.

The Best Weight Loss Tips Straight to Your Inbox!

Get valuable phentermine, nutrition, and fitness advice in our weekly newsletter!

The Best Weight Loss Tips Straight to Your Inbox!

Get valuable phentermine, nutrition, and fitness advice in our weekly newsletter!